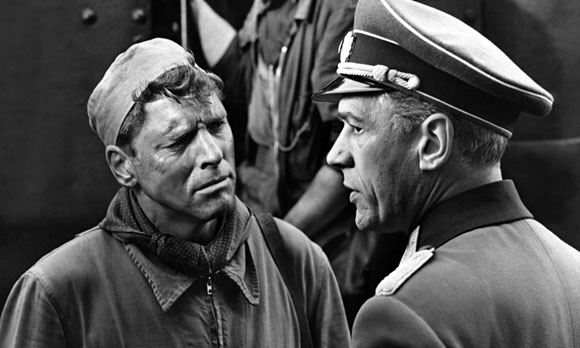 Not sure how I missed this World War II thriller from 1964, directed by John Frankeimer and starring Burt Lancaster and Paul Scofield. The Train tells the story of French railroad workers and their hard-edged manager Paul Labiche (Lancaster) who, as members of the Resistance, try to stop a train packed with valuable French paintings — Renoirs, Gaugins, Monets, a Picasso — from getting to Berlin in August 1944, just before the liberation. The thieving, art-obsessed Nazi officer in charge of the opertion is played by Scofield. The plan to save the paintings is ingenius but, of course, fraught with danger. The movie runs 133 minutes but never seems long. Shot on location in France and in black-and-white, with period locomotives, the film feels wholly authentic: Steamy, oily, noisy, gritty and greasy. And Lancaster, always a physical actor, was never more so than in this movie. (If you can find a single scene where a stunt double covers for him, please let me know.) I found this film on Amazon Prime. Highly recommended.

2 thoughts on “Recommended film: “The Train””