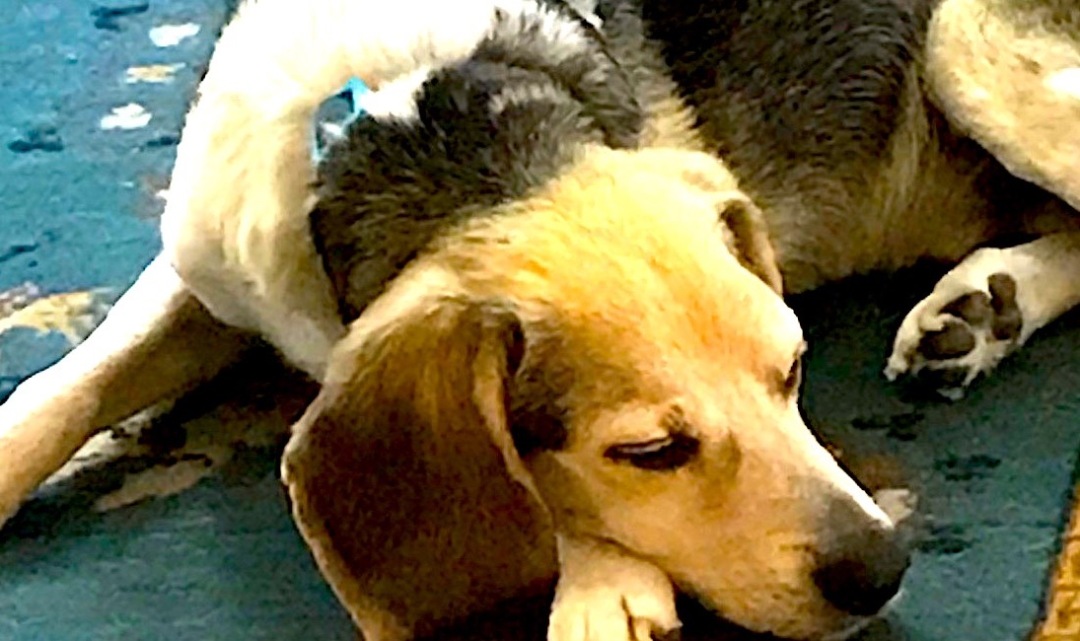 It so happens that we have a kitchen door that our dogs of first choice very much appreciated — a French door with five rows of windows, the lowest row allowing the canines to keep an eye on the backyard at all times. Arthur Valk, who designed the kitchen, recommended this style of door because it looked superb while providing a steady stream of natural light — not because we had beagles and beagle-mixes. Architects are trained to “consider all,” but I don’t recall Arthur considering the need of beagles to spot squirrels from indoors.

And yet, that’s how things turned out. For most of his years, before he got sick and lost his sight, Rocky had a daily pleasure. He would wake up and strut eagerly to the kitchen door and look through its lowest row of windows. He would spot squirrels under the bird feeder or rabbits in the clover and suddenly assume his alert posture. My daily pleasure consisted of quietly moving to the door and unlocking it, then pressing on the handle while simultaneously ordering an imaginary keeper-of-the-royal dogs to “release the hound!” The door opened and Rocky sprinted into the yard. My pleasure continued for the next several seconds as I got to watch Rocky chase the squirrel or rabbit to a fence line, barking in his beagle baritone, a howl from the baronial woods.

Of course, he never caught a squirrel, never caught a rabbit. After chasing them off, Rocky spent the next several minutes sniffing their latent presence in the grass. That was his thing. When we took him to wooded areas, he loved to sniff out chipmunks. Walks with him through our Baltimore neighborhood were not exactly aerobic because, while every dog stops here and there to sniff, Rocky’s olfactory organ was on high alert constantly, and the bushes and grasses along the sidewalk provided an endless smorgasbord of smells. You had to account for that if you took him for a stroll.

Rocky spent a lot of time snoozing. In fact, of all the dogs we’ve adopted, he was the snooziest. He would not fetch a damn thing. He did not take to my attempts at training him to do a single trick. He did not lick your face. He did not ask to sit on your lap. He was most interested in chasing food and snoozing, with the occasional belly rub, if you don’t mind.

When we first adopted him from the ASPCA, he came with a warning: “Escape artist.” We quickly discovered the reason for this when Rocky managed to scale a wood pile and make several successful escapes over the six-foot fence at the rear of our yard. We rigged up a way to keep him from doing that, and he settled for being a yard dog who got to chase squirrels and bunnies. He would occasionally take a position on an underused picnic table to watch over things.

The beagle came to live with us when my son went off to college, with his mom and sister believing that a new dog would serve as a replacement for the boy who had grown to manhood in our house. These 11 years with Rocky seemed to have gone by in a flash, just as my son’s progression from college freshman to a master’s degree and a house of his own did.

It was tough watching Rocky slow down; the vet diagnosed his diabetes about four years ago and, instead of the rabbit-and-squirrel dash, our morning ritual became an insulin shot. When he lost his sight, Rocky was heroic in his efforts to learn to walk through the house or yard without bumping into things. He also was able to maintain his habit of happily greeting us when we arrived home from work each day. What dog owner could ask for anything more?

Rocky left us overnight, at age 12, and I hope the god of all dogs gives him a good home, where he can spot and chase squirrels and bunnies into eternity.