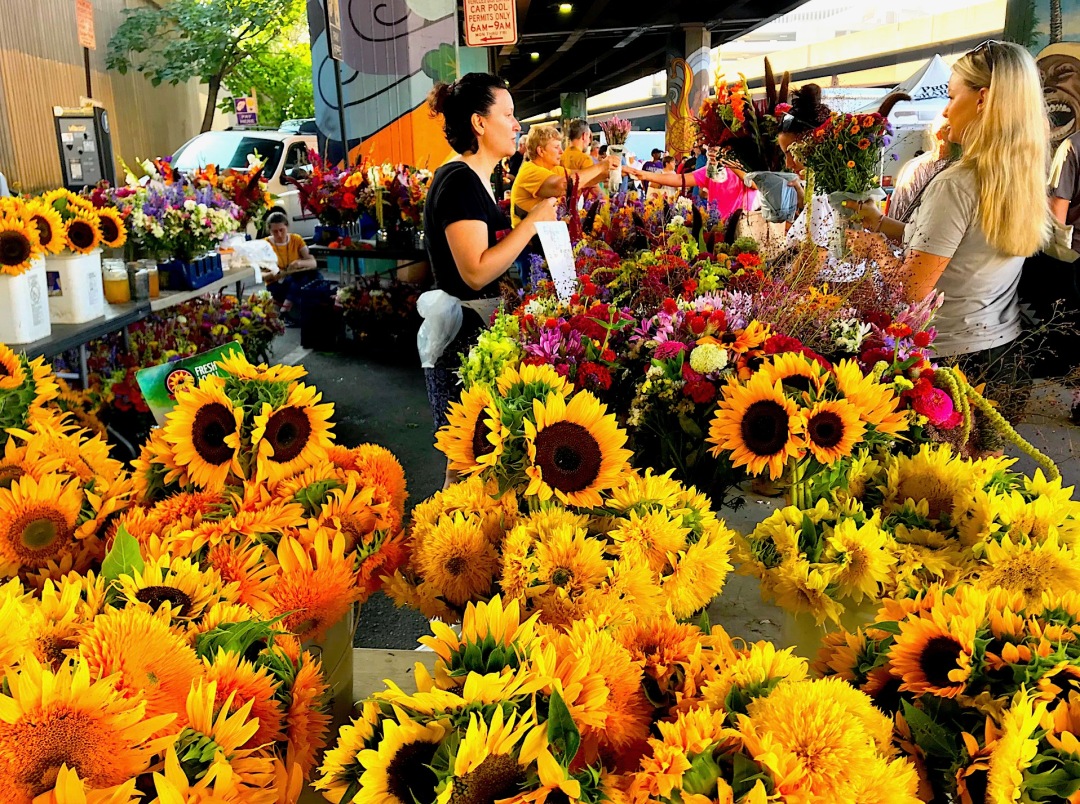 Why they call it Smalltimore

It took me most of an hour to buy two bunches of flowers at the Baltimore Farmers’ Market on Sunday, and not because the line was long but because I kept bumping into people I know and like. Before you think otherwise, I’m not complaining. This is how life in Baltimore is supposed to be. It’s why we live here. It’s why they call it Smalltimore. We had a story in The Sun the other day about how more and more people are shopping online and either pick up their groceries or have them delivered. And that’s the way of technology and the modern lifestyle, and it’s fine. But, as I’ve pointed out in my column, if you do too much of that online business, you’ll miss out on chance encounters with old friends or interesting strangers.

As you can see from the photo with this post, the Farmers Market flowers were gorgeous. The sunflowers were $5 a bunch or two for $8, and they caught my eye when I first entered the market. (My neighbor’s son, Jack, also caught my eye; he was making potato patties, Indian street food, at The Verandah stall.) The problem was — though it really wasn’t a problem, and that’s the whole point — I kept running into friends and acquaintances. There was Donna, who gets to the market each Sunday at 5:30 am, and has most of her shopping done before most people arrive. There was Michelle, an old friend from radio days; I had not seen her in maybe 15 years. She had just returned from visiting her daughter in the Republic of Benin, in West Africa. Michelle and I caught up on our kids, and then Nestor arrived with his wife, Jennifer, and we had a talk about Baltimore’s problems and how the city needs fresh, dynamic leadership. That went on for a while, but we strolled as we talked, and I left Nestor and his wife at the flower stand. I was all set to select a bunch of sunflowers when Gerry, an attorney I’ve known for more than 40 years, called my name. It was great to see him; we talked about my book, then moved into Trump and immigration, and ended up discussing the Roman Catholic Church and the sex abuse scandal. What I just described transpired over 50 minutes or so, and I would have been disappointed had it not happened. When I finally turned to buy my flowers, I was second in line.

3 thoughts on “Why they call it Smalltimore”