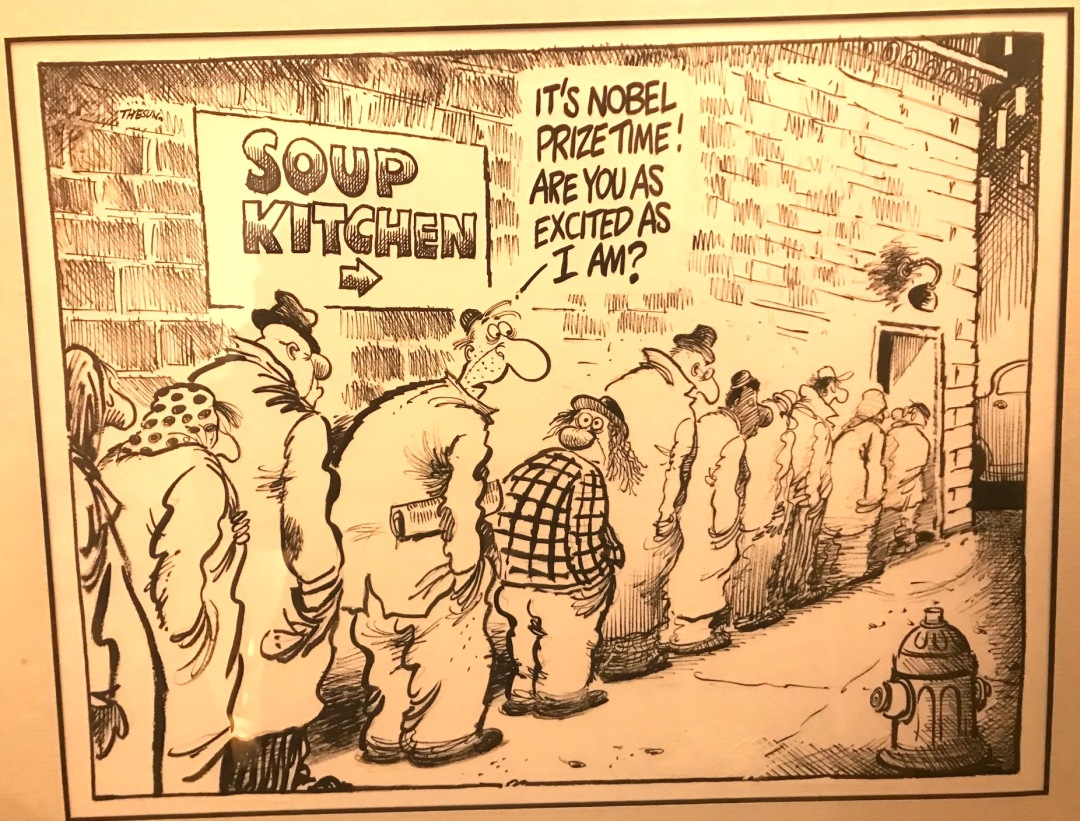 On the passing of cartoonist Mike Lane

Sad news this week with the passing of another excellent journalist and former colleague, the editorial cartoonist Mike Lane. He created daily cartoons for the Baltimore Evening Sun from the early 1970s, giving him a chance to include Richard Nixon among his subjects, into the 1990s, after the afternoon paper merged with the morning edition. At some point, perhaps when Mike left the Sun, someone wrote: “His outrageous expressions of outrage both provoke and exhilarate the newspaper’s patrons, and keep his editors busy defending him. His political genesis was born in the anti-war movements of the 1960s, an apt basis for a cartoonist’s urge to protest greed, hypocrisy and inhumanity.”

I often reflect on the many smart, well-read and talented people I have had the great fortune to work with over the 46 years since I first stepped into a daily newspaper’s city room as a college intern: Men and women who knew the worlds of government, the courts, the arts, the military, schools and higher education, business and industry, and who had a million contacts in those worlds; men and women who could write on deadline and produce either crisp news stories or good, long-read features; gifted photographers and illustrators, critics, sportswriters, obituarists, and hard-news reporters, investigative reporters, foreign correspondents, Washington reporters, copy readers, editors who could make wise, informed judgements about stories, editorial writers who could consider both sides of a controversial issue and pick one to argue in print.

And then there was Mike Lane, in his studio at The Evening Sun, with his sharp pen and sharper wit, quietly creating excellent cartoons day after day. What made them excellent? Mike’s cartoons were timely, and they reflected the gifts in his hand, his heart and his brain — his artistic talent, his humanity and his fierce, nurtured sense of right and wrong, all of them working together at the drafting board to produce a witty, often stinging take on a news story, a controversy or political development. Sometimes his subjects were local, sometimes national or international. They were almost always provocative and often hilarious, and sometimes word reached the newsroom about a politician or business owner, or perhaps a posse of Evening Sun readers, who had taken great offense at a Lane cartoon and taken the matter up with the publisher. Mike often had a stern visage, but he also had the pleased, mischievous grin of the Cheshire cat when he knew he had struck a nerve. That was often, and that was the whole point — to draw attention to things we should care about, to stop and think about the world around us, to highlight hypocrisy, to challenge the powerful and champion underdogs. And then, for Mike, the newspaper week might end with reflections and laughs over a beer with chums at Long John’s Pub on 29th Street; the weekend was for family, his great wife Gloria and his two sons, John and Mat, and, later on, grandchildren. Mike was a modest, quiet, deeply moral man with a razor-sharp sense of humor, and, while sad at his passing, I feel lucky to have called him colleague.

10 thoughts on “On the passing of cartoonist Mike Lane”