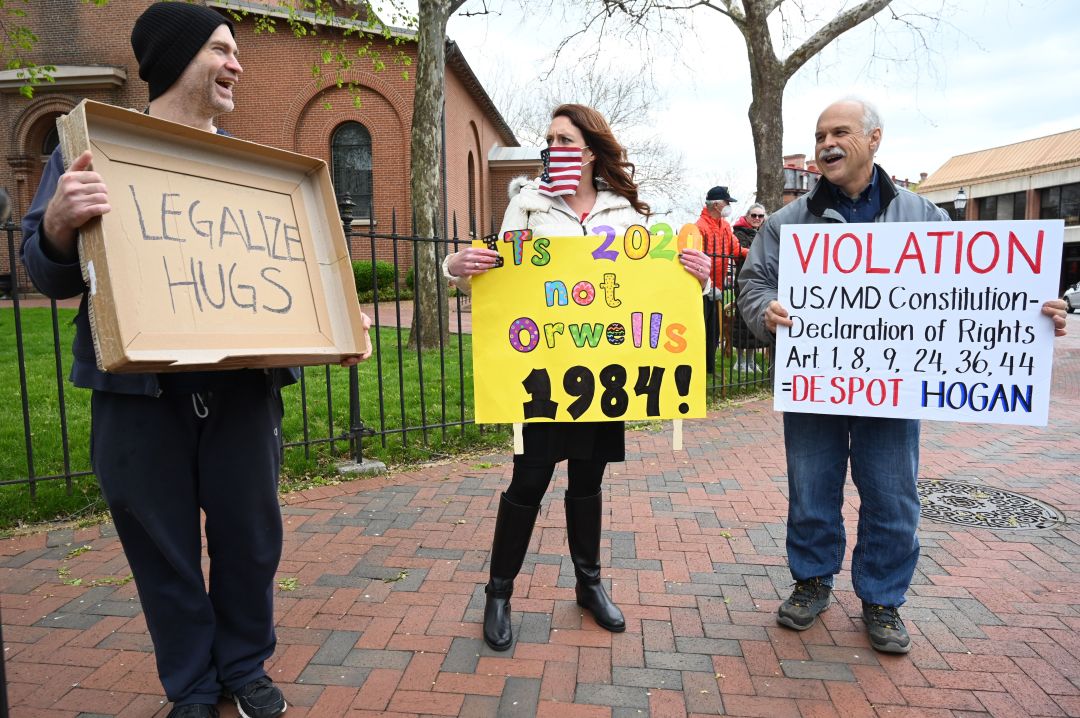 The Trump crowd hates the smart people, even in a matter of life or death

Trump and his crowd want to defy governors who have issued stay-at-home orders to slow the spread of coronavirus and save lives. Maryland’s only Republican member of Congress, the extreme conservative Andy Harris, is among those saying it’s time to loosen things up and let people return to work. (Harris has a medical degree and was an anesthesiologist before going to Washington.) Men and women, mostly Trumpies and some of them armed, demonstrated at state capitols on Saturday and called for the firing of the nation’s medical leader in the coronavirus fight, Dr. Anthony Fauci. The Sun published a letter from a prominent Baltimore developer, a Republican, who claims stay-at-home orders like the one issued by Maryland Gov. Larry Hogan, a Republican, are elitist: Those of us who have the luxury of working from home will be safe and able to afford the inconvenience, he argued, while workers of a lower class endure the most hardship.

It’s incredible that we’ve come to this: An epic matter of public health turned into another political battle, another attack on government, another confrontation along the country’s intellectual fault line. Trump loves this stuff. A recent national poll found 67 percent of non-college-educated whites approving of the job he’s doing. (In all other categories, Trump’s approval rating dropped again.) “I love the poorly educated,” he said during the 2016 campaign, and you can see why. This is his base. In Maryland’s 6th legislative district, a Trump stronghold in 2016, just 10.6 percent of residents 25 and older had an undergraduate degree. That was the lowest rate of college education in any legislative district in the state, and it was only slightly better than the rate for the entire Baltimore metropolitan region in 1970. Trump knows how to push the buttons of the less-educated and resentful. His tweets on the last few days came close to calling for armed insurrection.

But here’s another poll to keep in mind: Gallup found that an overwhelming majority of Americans — and that includes people who did not get college degrees — think it’s too early to lift stay-at-home orders. People are dying every day. There is no vaccine and, more importantly, our country is way behind schedule on testing for the disease. Without widely-accessible testing we can’t know who has the virus, who doesn’t have it, or who had it and recovered. Do you want to return to work or go to the mall under those conditions?

In the letter he signed urging Trump to lift restrictions, Andy Harris and other members of the congressional Freedom Caucus talk about the value of the “free market,” and apparently our freedom to conduct commerce and do as we please is more important than our right to life — or, at least, our right as taxpayers to have a competent government look out for our collective health and instruct us on how to live under dire circumstances.

It’s essentially the same argument used in opposition to environmental regulations and the regulation of banks and the financial system. It’s not only an anti-government argument, it’s anti-intellectual: If the smart people support something, it must be a liberal idea and, therefore, I must be against it. The nation’s important work to slow climate change has been held back by the same anti-science, anti-intellectualism, widespread among the Republican base, now the Trump base.

The free market crowd — the same one that got us into the last recession — hates being told what to do, especially by nerds in lab coats. The free-marketers are begging for Trump to take us deeper into a recession that is already occurring because public health experts tell us that lifting the stay-home orders now will lead to more Americans getting the disease and more Americans dying, compounding our economic troubles. That’s why the November election is truly a matter of life and death.

4 thoughts on “The Trump crowd hates the smart people, even in a matter of life or death”