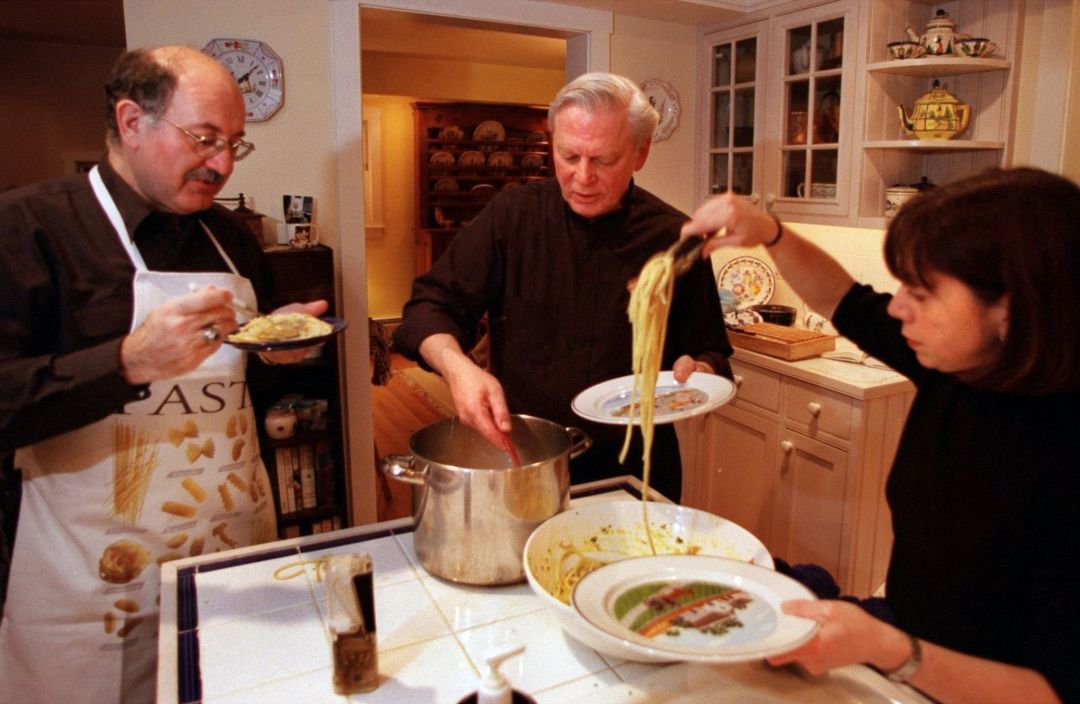 Marking the 20th anniversary of The Sun’s Carbonara Cookoff

Maybe all Italian food qualifies as comfort food — the good stuff that warms the spirit as it nourishes the body — so you’ll probably think I’m as nutty as pinoli to stand up and declare Spaghetti alla Carbonara the ultimate Italian comfort food.

What, you ask, are you crazy? Are you trying to start something? How can there be such a designation in such a crowded field? There are all those wonderful dishes your mama — or somebody’s mama — used to make: pizza, minestrone, spaghetti and meatballs, pasta fagioli, polenta and lasagna. They all could compete for the heavyweight title of Ultimate Italian Comfort Dish. They all warm the soul and fatten the thighs.

But I’ve investigated this metaphysical realm thoroughly — Italian food and the soul, especially the food part — and that’s my conclusion: Once you’ve experienced Spaghetti alla Carbonara, it’s hard to find as much comfort in anything else.

Carbonara is a rich dish made from simple ingredients — eggs, butter and/or olive oil, cheese, bacon — and, once these elements become entangled with hot pasta, they touch the deep senses and take the chill out of my bones. When I inhale a freshly cooked carbonara, I feel as though I’ve returned to some steamy-warm, ancestral kitchen on a little farm in the Roman countryside.

OK, maybe you don’t buy the channeling bit. I agree: It’s a little too loopy, in the Shirley MacLaine sense. So let me run this past you: Maybe I take comfort from this dish because it blends a staple of my Italian ancestors — spaghetti — with a staple of America — bacon and eggs. In fact, it could be the Ultimate Italian-American Dish.

I’m not the first to proffer this concept. In 1983, Calvin Trillin, author of “Third Helpings” and “Alice, Let’s Eat,” felt such passion for Spaghetti alla Carbonara that he crusaded to have it replace turkey as the national dish on Thanksgiving Day.

Consider what some historians accept as the origin of carbonara: In the waning days of World War II, American soldiers in Rome made nice with local families, gave them fresh eggs and bacon and asked them to prepare meals. The locals added the pasta and grated cheese, thereby either inventing a dish or reviving one that previously had had little exposure among Americans.

Others believe the dish is much older than that, cooked on open fires by charcoal makers, thus its name. I’ve also heard the theory that crispy, carbon-black bacon is what gives the dish its flavor and name.

Whatever its origins — some say it is unmistakably Roman, others say it originated in the Lazio region — Spaghetti alla Carbonara is a wonderful treat for a winter lunch or supper. It offers a welcome break from the tiresome tomato sauces that coat most other popular Italian dishes. It’s just not the usual Ragu.

But, I know: It sounds evil, not comforting. My God, bacon and eggs with parmigiano and pasta?

Yes, and maybe a little butter.

And maybe a little cream!

And some use olive oil. I’ve heard it called an “Italian heart attack on a plate.” To some, it’s Spaghetti Alla Cholesterola! The Ultimate Italian Guilt Trip.

But come on, now. Tutto in moderazione. All in moderation.

Spaghetti alla Carbonara is not weekly, even monthly, fare in my house. I have been blessed with the limit-setting instinct. I know that a steady diet of this stuff would put me in the cardiac unit at Hopkins, and eventually I’d be doomed to a diet of Subway sandwiches, like that former big-pants man Jared.

So, I make carbonara about twice a year — about as often as I once purchased prime lump to make crab cakes.

There’s a reason for the crab-cake segue.

Two-and-a-half years ago, when I became convinced that the fishery was in trouble, I decided to boycott Chesapeake Bay blue crabs. I haven’t eaten Maryland or Virginia crab meat since the summer of 1998.

When I renewed my boycott last year in my column on The Sun’s Maryland news page, I suggested that readers treat themselves to something grand — a guilty pleasure — in lieu of a crab dish. So, instead of crab cakes, I now make Spaghetti alla Carbonara.

Reader mail poured in from carbonara fanciers across the Baltimore metropolitan region. All agreed with my praise for the dish and its comforting qualities. But there was little agreement on the method of preparation and fair divergence on ingredients. So one evening this winter, I had a “Big Night” at my house. I turned my pots, pans and gas burners over to three people with varying but solid cooking skills and mutual affection for the Ultimate Italian Comfort Food.

The Rev. Joseph Bonadio, of St. Francis of Assisi Roman Catholic Church on Harford Road, claimed to know how to make a formidable carbonara based on his dining experiences in a Rome restaurant. He makes his with pancetta (cured belly of pork) purchased from Mastellone Deli and Wine Shop in Northeast Baltimore, and mixes it in a pot.

Elia Mannetta, an old friend and former short-order chef from Little Italy, first made the dish for me 25 years ago, and he’s seen it prepared many times in households in Big Italy. He makes it with American smoked bacon and mixes it in a large skillet.

Donna Crivello, the talented Donna in Donna’s coffee bars as well as a teacher of Italian cuisine (Wednesday night classes at the Gallery at Harborplace), also agreed to take part in Big Night Carbonara. She makes her Spag-Carb with prosciutto and mixes it in a big pasta bowl.

Their recipes are below. Pay particular attention to the methodology, because Father Joe, Elia and Donna each showed our guests a different way to prepare the dish. Each had a creamy texture.

Personally, I prefer a drier, more granular finish to the dish. That’s why I always follow Elia’s method, but with an important variation prescribed by Elizabeth David in her classic, “Italian Food.” I pour the beaten eggs into the hot skillet just seconds before adding the spaghetti. I remove the skillet from the heat and toss the mixture, adding the cheese. The eggs and cheese cling nicely to the hot noodles, and the finish is anything but creamy. I serve the carbonara right off the stove.

There’s a trick to getting the eggs and cheese to cook on and cling to the noodles.

1/2 pound pancetta, sliced at the deli like bacon, then cut into small slivers

Heat a little olive oil in a skillet and fry the pancetta until the fat becomes transparent. Drain the pancetta on a paper towel. Beat the eggs and half-and-half together in a bowl. Melt the butter in a microwave. Cook the spaghetti in salted water, according to package directions. As soon as it is ready, drain into a colander and return it to the same pot. Add the butter, pancetta and eggs mixture, stirring constantly with wooden spoons so the eggs cook on the hot noodles. Add the Romano and pepper to taste. Serve immediately, with chilled Fontana Candida Frascati wine.

Note: Eggs should be fresh; no cracked shells.

2/3 cup Parmigiano-Reggiano cheese, freshly grated by your significant other

In a skillet, heat a little olive oil and fry the prosciutti until it becomes slightly crispy. Remove it to a platter covered with a paper towel. Cook the perciatelli (about 10 minutes) in salted water. Make sure you have enough water in the pot. “Pasta likes to swim,” Crivello says.

In a warm crockery bowl large enough to handle the cooked pasta, beat the eggs, add the grated cheese and a liberal grinding of black pepper. Drain the pasta and pour it into the bowl. Add the prosciutto.

With tongs toss the eggs, cheese and pasta, coating the strands well. Sprinkle in the parsley. Serve at once, with an Orvieto or a Vernaccia di San Gimignano.

Note: Eggs should be fresh; no cracked shells.

In the largest skillet you can find, fry the bacon pieces until crispy. Turn off the fire. Spoon away some of the grease, but save most of it. Push the bacon to one side and tilt the skillet slightly so the bacon does not sit in the grease.

Cook the spaghetti in the usual way. Beat the eggs in a bowl, season with freshly grated black pepper, and set aside. When the spaghetti is almost ready, tell all your guests to grab a plate and a fork. “People have to be disciplined,” Elia says. “They have to be ready to eat this dish as soon as it’s ready.”

Reheat the grease and bacon pieces for a minute or so, then reduce the heat. Drain the pasta in a colander and immediately pour the pasta into the hot skillet. Shut off the burner or remove the skillet from the heat.

Add the eggs to the pasta and toss all ingredients madly. Add the cheese, another liberal dash of black pepper and the parsley. Serve at once, with a good Chianti Classico.

Note: Ham can be substituted for the bacon, and sauteed in butter and olive oil. The vegetarian version of this – no bacon, but plenty of butter, cheese and eggs – is also delicious. Eggs should be fresh; no cracked shells.

This story first appeared on the feature page of @The Baltimore Sun on Feb. 21, 2001.

One thought on “Crazy for Carbonara: The Ultimate Italian Comfort Dish”