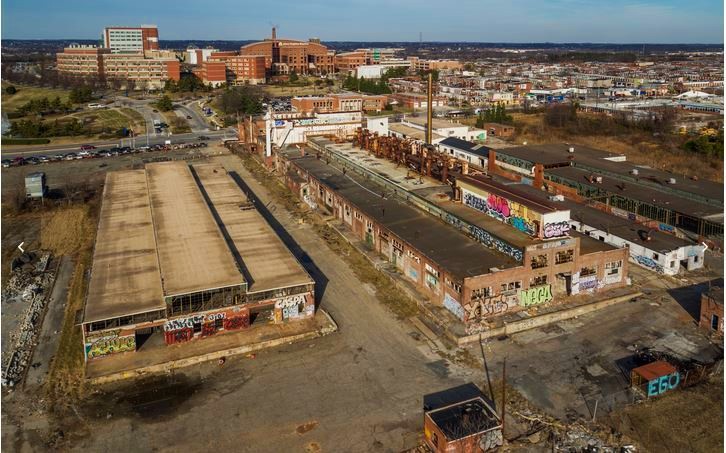 Transformation: 20 acres of Baltimore back from the dead

My Friday column in The Baltimore Sun tells how the abandoned and contaminated PEMCO property in southeast Baltimore, across from Hopkins Bayview, became a new shopping center called Yard 56 and how a determined developer named David Bramble made it happen.

Founded in 1911 as the Porcelain Enamel Manufacturing Corporation, the company once had 600 employees worldwide and plants in Argentina, Belgium, Italy and Spain. Founder Karl Turk Sr., a German immigrant, was considered the “father of the porcelain enameling industry,” after inventing the process that converted porcelain to a wet form that could coat iron.

Turk also introduced color to porcelain coatings, including the orange-colored roof on Howard Johnson hotels and restaurants. At a 1926 Gas Association conference, wives of the attendees reportedly swarmed a Pemco display of kitchen stoves in various colors, which went largely unnoticed by their husbands.

The company’s $750,000 research lab, which opened in 1962, was named for Turk, who was Pemco’s chairman when he died in 1954. His sons and grandsons followed him through the company’s ranks.

Pemco was also the first Baltimore business to have its own heliport. Opened on Sept. 17, 1958, it was built in one day for $3,000. Officials wanted a faster way to get its executives and products to Friendship International Airport — now, of course, BWI Thurgood Marshall Airport — and to Pier 4 on Pratt Street.

In 1979, city officials called on the company to clean up lead contamination on the Eastern Avenue property. A year earlier, the company was required to install devices that monitored fluoride emissions. In 1980, Pemco’s then-owner, Mobay Chemical Corp., paid a $10,000 government fine for excessive fluoride emissions.

The company left town in 2006, and the site soon deteriorated with vandalism and sporadic fires.

But you should see it now, with the first phase of its transformation complete, and reclaimed pieces of the old factory works serving as sculptural hommages to PEMCO.

The grand opening of the Streets Market, an anchor tenant, is this weekend.