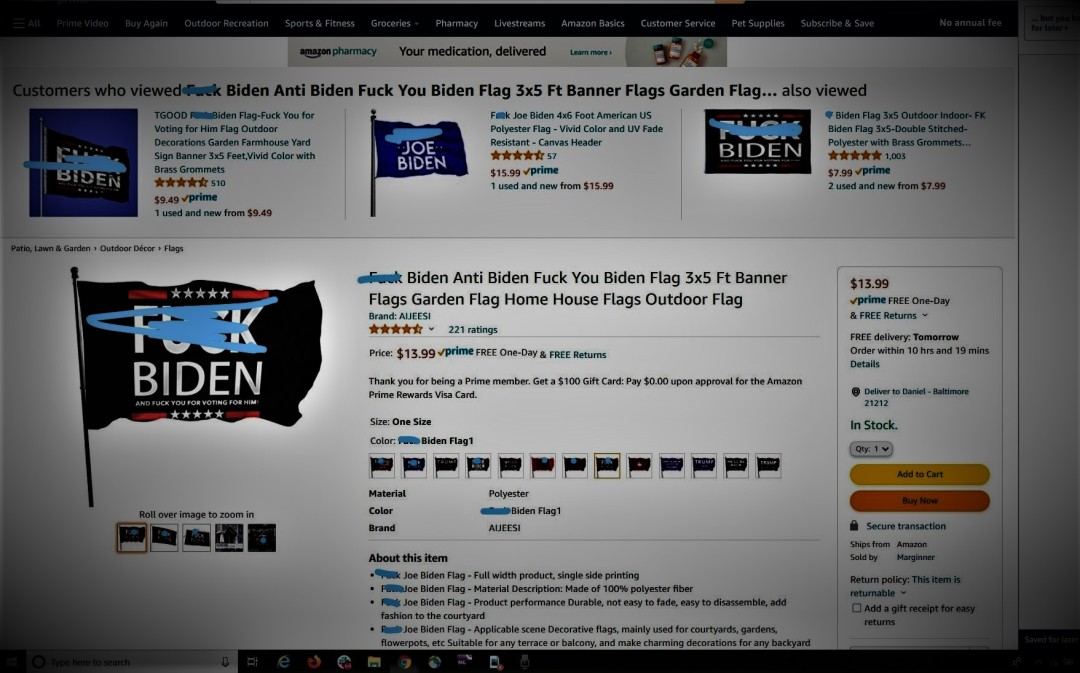 I saw these offensive flags for sale on Amazon and decided this is the last straw — I’m done buying products this way. I told myself several times over the years that I would stop this lazy practice of buying stuff through Amazon, and broke that pledge a few times, particularly during the pandemic. Now I’m really done. This did it for me. A company this large and profitable can afford to be more discerning in what it sells. (And I know: Amazon sold similar merchandise about Trump, but I did not know any of that until I saw the “Fuck Biden” flags today. While I can understand the viceral sentiment of “Fuck Trump” because he was so vulgar and invited hatred with his lies and despicable acts, even before he became president, I’ve seen nothing that justified this vulgar dismissal of Biden. These flags represent the raw hatred of the man who fairly beat Trump in an election and made a woman of color his vice president — it has nothing to do with ideology — and to put hatred of Biden on a level with despisal of Trump is just another false equivalency, and furthered by Amazon.) For this and all the other reasons previously stated in this space, especially Amazon’s anti-union practices. I’m done, and you should be, too.

Father’s Day is next month, and if you thought about buying my book as gift, please patronize a local bookstore; ask them to get it for you. Or order directly from the publisher. (OK, it’s a shameless plug, but I’m plugging the bookstores and the publishers, too, right?)

End of rant and public pledge.

Here are links to the books of some local authors: