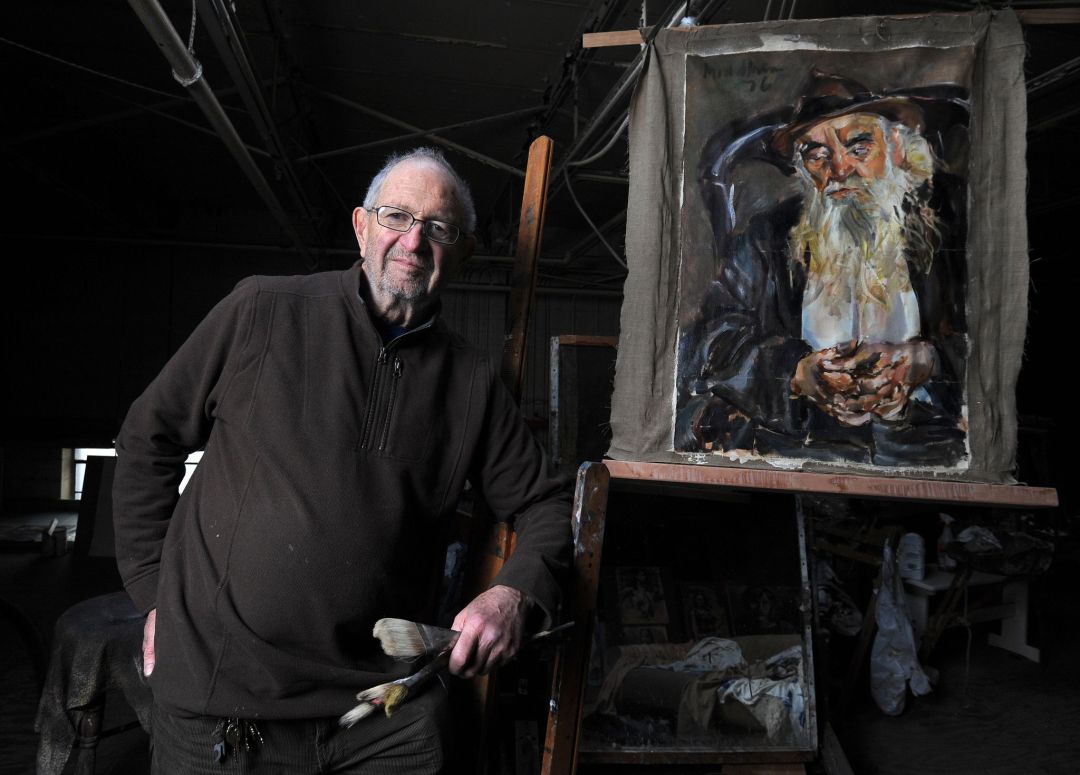 From the archive: Raoul Middleman, the artist at work in Baltimore, his city forever

I wrote this column about Raoul Middleman in December 2013. The artist died Friday night. His obituary appears in today’s Baltimore Sun. The photo above shows Raoul with one of his portraits of the Great Dantini. The photograph is by Algerina Perna

This update on the life of Raoul Middleman was not meant to be nostalgic. At 78, the irrepressible Baltimore artist is still going strong, and some of his recent work might be his best, a remarkable thing for a man who has been painting for more than half a century.

But we could not avoid Memory Lane.

We landed there the other day when Middleman took me to the second floor of his new studio, a former sheet-metal shop that has become a warehouse for thousands — Middleman thinks the number is between  8,000 and 10,000 — oil and watercolor paintings and charcoal  sketches from a breathtakingly productive career.

I was overwhelmed by the first floor, which held rack after rack of work from the last four decades: seascapes, landscapes,  urbanscapes, still lifes, portraits and self-portraits, bawdy  nudes, large punk-leather narratives, delicate watercolors, and charcoals of horses that still race with the energy that was in Middleman’s hand 30 years ago.

Even with so much to see on the first floor of the large industrial space, Middleman insisted we take our coffee to the second level.  At the top of steel steps, on a sprawling floor under skylights, he had unrolled a picture of Baltimore from the 1970s — paintings of artists and actors, students and old friends, faces of people from The Block and from Mount Vernon; scenes from the city’s industrial backstretches, and, floating above it all like an apparition, a portrait of Dantini the Magnificent.

“You remember Dantini, don’t you?” Middleman says, coffee cup in one hand, cigar in the other. “He’s been shown in Tel Aviv.”

The latter is a reference to a gallery in Israel, Rothschild Fine Art, that deals in Middleman paintings. The former reference is to the late Dantini the Magnificent, one of Baltimore’s bygone eccentrics, a long-beard who performed card tricks and magic at the Peabody Book Shop and Beer Stube, also long gone. Middleman used to see Dantini there. He painted him a few times, finding his mysterious eyes and wizard beard irresistible.

Obviously, the Dantini hanging by the skylight in Middleman’s new studio is unsold — as is the case with so many of Middleman’s works. The man presumably has made a fine living from his artistry; he has had numerous solo and group exhibitions in New York and Baltimore. The C. Grimaldis Gallery on North Charles Street has had several showings for Middleman, one last winter.

So, considering all the paintings sold, along with the thousands still in storage, Middleman might be unparalleled for productivity.  He is an industrial-strength artist, a self-described “impatientist” whose brush strokes reflect his quick mind and energetic instincts. He can recall a day of five paintings, and there were several days of two or three. He recently painted in four hours a remarkable reclined nude reflected in a mirror.

I had to be careful where I stepped. Middleman had placed dozens of paintings from the 1970s and 1980s on the floor, and in places the canvases were three and four deep. The rolling and storage of these paintings had been flawed, and now they need to be flattened until Middleman can stretch them for several shows he anticipates in 2014.

While we were standing there, he started to wax nostalgic about the 1950s and early 1960s and The Block, Baltimore’s burlesque and strip joints.

“Remember the Piccadilly?” he asked, referring to a nightclub, also long gone, that featured a doorman-barker (“a perfect cherubic herald at Venus’ door”) named Richard and a comic emcee named Max Barron. Barron introduced the club’s exotic dancers to the audience. “Max did this rant …”

And this rant went something like the rhyming, pun-laden stream-of-consciousness rap Middleman suddenly started to recite:  “Hipsters, quipsters and flipsters, welcome to the Piccadilly. Ladies and gentlemen, we have here a little girl who’ll meet, greet and treat all your new hopes, a tender slender bender, a multitude of pulchritude. North, south, east, west, she puts her body to the supersonic test. … This little girl used to work in a window shade factory and didn’t know which end was up, worked in an insane asylum serving soup to nuts. … Intellectual and bisexual, she’ll titivate the appetite and suffice the erudite. Here she comes …”

Wow. Where did that come from?

“I roamed The Block in the late ’50s and early ’60s and gleaned the patter from then, mostly from Max Barron. … I lived on The Block during the early ’70s, above Boot’s Show Bar, and sometimes, when the doorman took a break, I would substitute and deliver my rant.”

We stepped away from the old paintings and the Baltimore of Dantini and The Block, and I looked at Middleman’s work from the past few months, and it was astonishing, all of it — deep dives into human personality, the brush strokes perhaps less impatient than before but still full of life.

The last time I spoke to Raoul was in 2020, and this column about artists at work during the pandemic resulted.

2 thoughts on “From the archive: Raoul Middleman, the artist at work in Baltimore, his city forever”