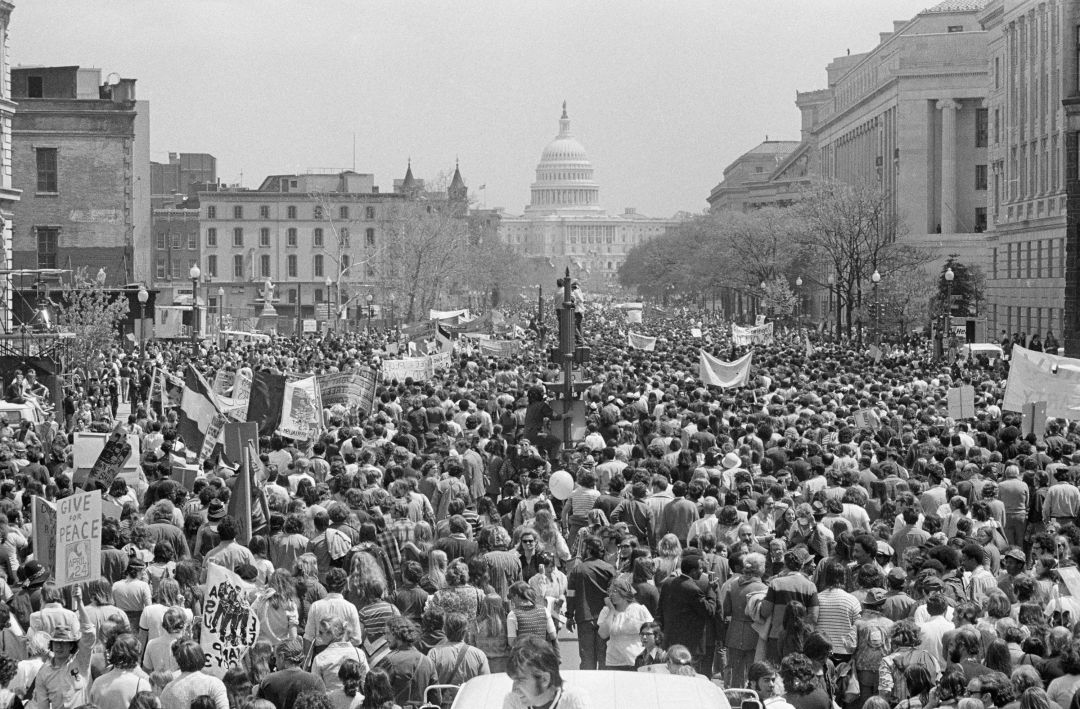 Vietnam War protests were bitter, but they were about policy. In the Trump era, it’s all personal

Since the founding of the Republic, people have always been at odds, based on their personal interests, their religious beliefs, their life experiences, their political loyalties and prejudices. I witnessed American debate at its most intense — over the U.S. involvement in the war in Vietnam in the 1960s and 1970s. But where we are today, in the Trump era, seems uniquely divisive, nasty and personal.

Here’s what happened: Adults who had lived through the Great Depression and World War II generally accepted authority. Many of them had come to trust and respect FDR, the New Deal Democrat, in the 1930s and 1940s. They voted for him four times, then Harry Truman once, and Truman’s successor in the Oval Office was Dwight Eisenhower, Supreme Commander of the Allied Forces in Europe during World War II. The men and women of that generation — our parents and grandparents — came to see the government as an apparatus for good, and they believed the U.S. had reached moral high ground by defeating fascism in the big war. Things started to break down, however, when the children of that generation started to be drafted into military service during the Vietnam era. Instead of accepting what government leaders and generals said, they challenged it. They asked why we were engaged in such a dubious, deadly and distant conflict. There was a stark generational split over the war, and it was bitter. You heard a lot of older men and women challenge the war protestors to love America or leave it.

My late Baltimore Evening Sun colleague, Carl Schoettler, served in the Army in Korea and covered periods of the Vietnam War for the newspaper. He thought we should erect a monument to the people who took to the streets during the 1960s and early 1970s to protest the war. Some of them died during protests. The impassioned opposition to the war kept LBJ from running for a second term in 1968 and forced his successor, Richard Nixon, into peace talks. The war still went on too long, and too many Americans and Vietnamese died. But protest from people who were called communists and anti-American helped turn public opinion against the war.

The message: We cannot win every war, we should not fight every war, and we are not always in the right. It was a hard thing for the “Greatest Generation” to accept, but many of them came around to it. Others remained bitter and voted for Ronald Reagan, who said the U.S. could have won the war in Vietnam had the generals been allowed to — whatever that meant, and at one point it might have meant “limited use of nuclear weapons.”

This is all background to what I really wanted to say today: That we are at a uniquely divisive and nasty place. The Vietnam era debate was about whether we should fight a war. It was about policy. In the Trump era, it’s all personal. Trump supporters cannot seem to make a cogent and rational argument for their man. They mention how well the economy is doing, but if you challenge them on other grounds — Trump’s racism, for instance, or the way his administration has been treating Central American families seeking asylum here — you get two basic reactions: Obama was awful, and/or you’re a libtard. They either bash the previous president or call you a name. I see it in social media all the time. I see it in the profane mail I receive from Trump supporters. They think he’s a great president. They think the country is better off than it was under Obama. They think we are respected in the world again. They have accepted the Trump view of reality, and refuse to see him as a racist. It’s understandable. If they voted for the guy, they are not going to concede that he is a bigot. Trump has demeaned debate, he has made political disagreement personal, and his followers indulge in the same kind of juvenile name-calling he does. Recently, I dropped a man from my Facebook page because he had engaged in cheap name-calling — not as a last resort in a losing debate, but as his first line of attack. (He also told others on Facebook to “love it or leave it.”) There have been dozens like him.

I am not saying debate over Vietnam was always civil and never personal. But it was mainly about policy. It was mainly a question about how the U.S. should use its military might. Today, the Trump supporters are pretty much tribal; they stick with him no matter what because to do otherwise would be an admission that they made a mistake, or that they had cast aside their principles. They jump immediately to attacking those of us who think Trump poses an existential threat to our democracy. There’s no debate, and there’s no winning them over. Going into the next election, they are not going to be concerned with issues like health insurance or infrastructure needs.

Which is why the prominent antiracist Tim Wise is right about what the Democrats should do to deny Trump a second term — hit him as a racist, and challenge voters to decide what kind of country they want this to be. “People who say the Dems should ignore Trump’s race baiting because it’s some genius political strategy calculated to distract us, are idiots,” Wise writes (with some unnecessary name-calling) in a long thread on Twitter. “He is no genius. And if you downplay it, you NORMALIZE him. If you make this about policy, you NORMALIZE him. He is a racist…” You can read at this link the rest of White’s commentary, compiled by Thread Reader.