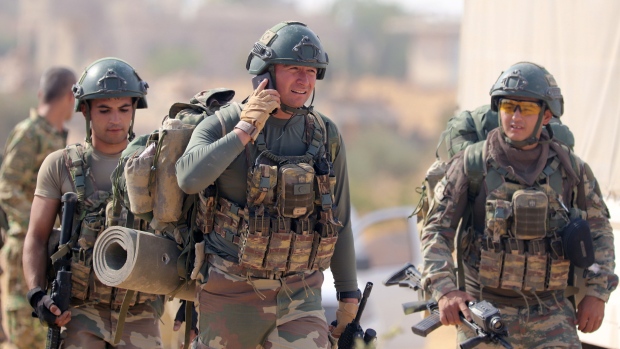 Guess what: Trump might have suggested something that wasn’t true: “It’s time for us to come home,” he said, defending his removal of U.S. troops from Syria. But the troops he claimed to be bringing home from “endless wars” are not coming home. A few thousands went recently to Saudi Arabia, and now a Pentagon official reports that troops from Syria are moving into Iraq. Reuters reports that they are already there.

More on that in a second. First, it should be noted how gullible Trump supporters are — or how they only hear what they want to hear and apparently believe everything Trump says even though everything he says is usually a lie or something close to one.

I got this email from a woman who did not care much for my take on Trump’s withdrawal of troops from Syria: “I read your article in the Sunday Sun, and isn’t it about time that countries in the Middle East took care of their own problems? Mothers, fathers, wives, children, etc. have lost loved ones to those conflicts and for what purpose? I didn’t have a son to send off to war, and I thank God for that. I agree with what Trump did as it is time for them to help themselves. And, the discord in this country towards a man who has done so much, is disgusting.”

I would point out that, while removing troops from Syria sounds like Trump keeping a campaign promise to pull the U.S. out of endless wars, nothing could be further from the truth as I write this. The troop withdrawal from northern Syria allowed hundreds of ISIS fighters to escape imprisonment, according to numerous published reports. And guess what? The U.S. troops from Syria have moved into Iraq to fight . . . . ISIS!

From Associated Press: “The Pentagon chief says all U.S. troops leaving Syria will go to western Iraq and the American military will continue operations against the Islamic State group. They aren’t coming home and the United States isn’t leaving the turbulent Middle East, according to current plans outlined by U.S. Defense Secretary Mark Esper before he arrived in Afghanistan on Sunday. The fight in Syria against ISIS, once spearheaded by American allied Syrian Kurds who have been cast aside by Trump, will be undertaken by U.S. forces, possibly from neighboring Iraq.”

Oh, I should note that, just a couple of weeks ago, Trump sent an additional 3,000 troops to Saudi Arabia to help protect oil fields from further attacks that the administration blames on Iran. And guess what? Trump claims Saudi Arabia is going to pay “100 percent of the cost” of that operation.

Right. Sure. Of course.