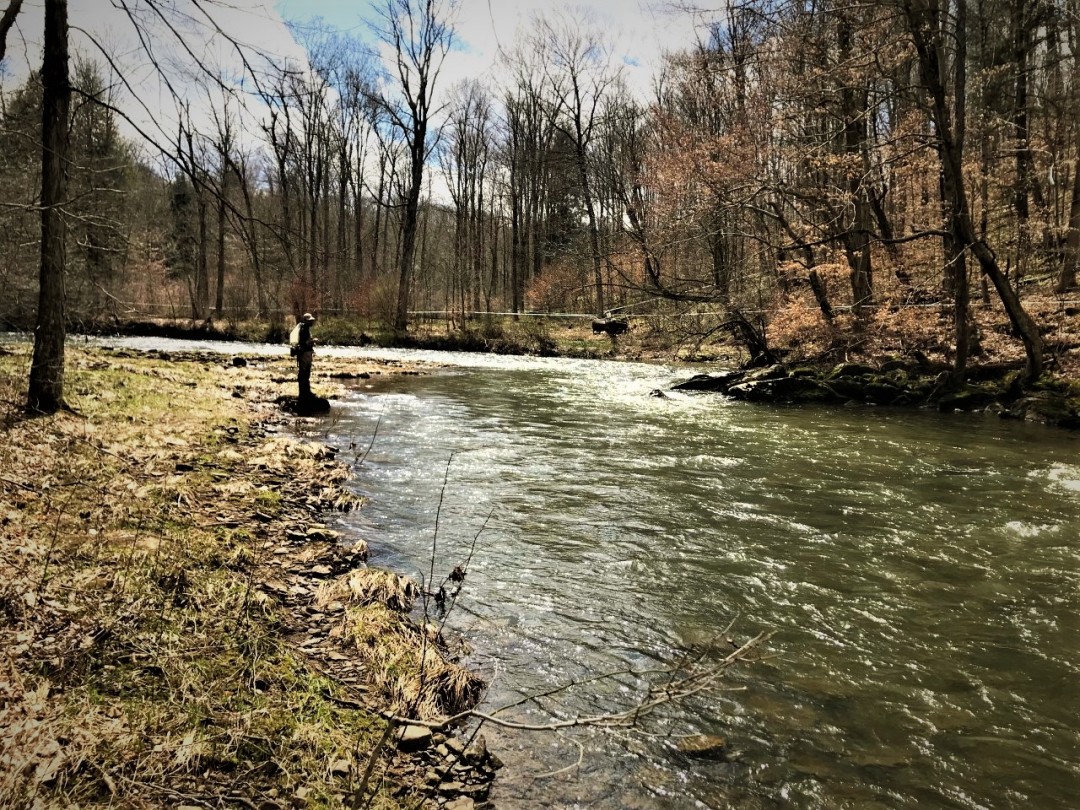 On the river: Why go up there?

Ever go up there? Ever go up past the bend in the river, up past the section you’ve fished many times before? You almost always catch fish within 200 yards of the parking lot, so why bother? Why go up there? No one else ever does. There are probably no trails; you’ll get caught in briers or fall on your ass. You’ve never been up there, so you don’t know what it looks like, and unless the fish-stocking crews were really ambitious, there are probably no trout.

So why go up there?

Why walk up the farm road, past acres of familiar trout water, to get to a place you’ve never fished before?

That was the conversation I had in my head Sunday morning while pulling on chest waders and boots.

But, despite the effort, I did not talk myself out of going up there. My bad knee felt good for a change, and I wanted to explore. This is the time of coronavirus, and, given the worries we live with now, I wanted to see more of a river I’ve fished and enjoyed many times.

My son, Nick, was with me, and he was agreeable to giving it a try; he’s got the legs for it.

So Nick and I took the farm road for about a quarter-mile and found a place, through woods, to get down to the river. The river up there was twice as wide as I expected it to be, certainly much wider than the riffly section back at the parking lot. There had been rain the day before, but the river was wadeable and fishable. In some spots, it seemed absolutely perfect for trout fishing.

There was a tree buffer on both sides — oaks on one, hemlocks and rhododendron on the other — and beyond both sides, Amish farmland.

But as we hiked and fished, tossing streamer flies into fishy-looking water, I realized we had made a commitment. About an hour into the trek, I looked up and noticed that behind me, on the west/northwest side of the river, was a high, steep ridge. If I should decide to go back to the parking lot, no way was I going to slip out easily to the farm road. The only way out was the way we had come in. But doing that seemed like a lame idea.

So we kept going. We didn’t catch any fish, though we saw hundreds of places for trout to hold and feed on the many caddis flies coming off the water at mid-morning.

I was right about the lack of trails, so I spent most of my time in the water, maneuvering with a wading staff around and through rhododendron branches. After we split up, Nick started casting from the south/southeast side of the river, where the banks were lower and easier to navigate. So I waded across and rejoined him there.

That made the hike easier, but, still, we had made a commitment. There’s no way we were climbing up the ridge to get to the farm road. We were going to hike and fish until the land flattened and we could see our way out.

If that sounds like I was eager to leave the place, that’s not exactly how I felt. But after three hours and three crooked miles and no fish, an angler can get a little antsy.

Still, at moments like that, when you feel you are in a secluded spot, you get the answer to that question: Why go up there?

You go because you will have the whole place to yourself. Because you will see water no one else has fished in weeks or months, maybe a year or two. You will know silence. You will look up at big sky and herds of clouds moving on the March wind. You will come upon an unusually sharp S curve in the river and fish it because it looks like the place a big brown trout could be hiding. You won’t catch anything — because this section of river needs to be float-stocked and that apparently has not happened yet, or at all — but you will enjoy a moment of high expectation.

“Damn, there shoulda been a trout there,” you will say, and more than once.

You move on. Your middle-aged knee gets stiff and sore, but your son keeps moving and casting to dozens of fishy-looking spots. You try to keep up with him. You fish the tail of pools; he fishes the top of them. Neither of you catch anything, but you are together on a spring day, with all worries cast to the wind. If only the wind could take the coronavirus away.

After four hours of hiking and no fish, you can see the farm road again. Your son, with his strong legs, walks all the way back to the parking lot to get one of the cars, and you sit on a log, across from an old barn, a silo and some cows, and wait for your ride.