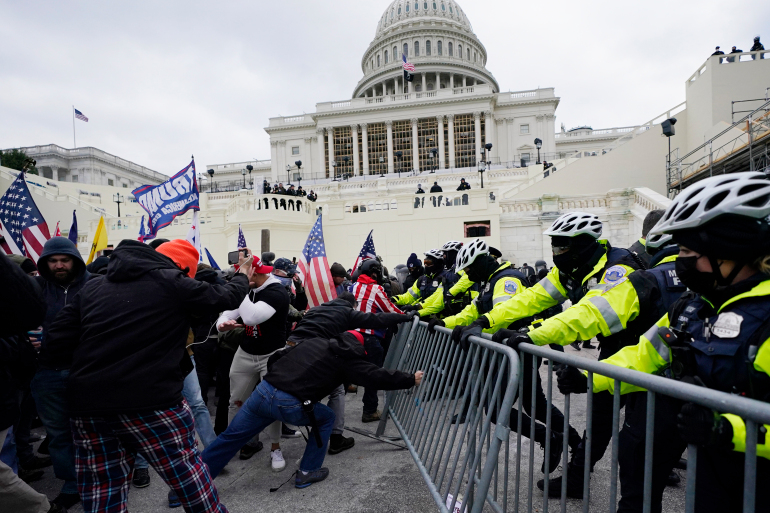 Response to a tragically Trumped-up Terrence

I usually don’t bother to respond to Trumpies who continue to espouse the Big Lie or deny that what happened on Jan. 6 at the U.S. Capitol amounted to an attempted coup. I haven’t much stomach for false equivalencies, what-aboutism and both-sides-bad because I don’t believe both sides are bad. I believe Republicans in Congress and numerous state capitols are engaged in voter suppression efforts, that too many of them still support the worst president in history and that the biggest problem with vaccination against the coronavirus has been created by Republicans in politics and media. That’s enough to tip the balance and dismiss the claim that one side is just as bad as the other.

But here’s one false equivalence that needs to be dealt with: A comment that came from a person named Terrence McCormack about a recent blog post of mine on Trump’s loser army that attacked the Capitol:

Gee, Dan, I didn’t see much coverage by you of the BLM, and Antifa riots, murders, and other assorted mayhem sanctioned by your pet Democrat politicians last year. You keep missing the main story right in front of your eyes: Baltimore’s killing and violence in a Democratic stronghold. Keep dreaming of those bad, bad Republicans and Andy Harris. You’re so bitter… …

So I’ll address this one.

Here’s a link to one column I wrote about the urban mayhem of a year ago, when Trump sent militarized federal police to Portland and threatened to do the same to Baltimore. It constituted Trump’s only interest in cities while he was president (unless you include his concern for the trash and rats in Baltimore, a majority Black city where, Trump said, “no human being would want to live.”)

The reason McCormack brings this up is because raising “BLM, and Antifa riots” is the only counter people like him (I’m assuming he’s a Trump supporter) have to the horror of the Capitol attack. They think, falsely, that the daily ridiculous violence in Portland was something tolerated by — even sanctioned by — Democrats when there’s no evidence of that. They think BLM protests after George Floyd’s murder-by-cop were violent when surveys have shown the vast majority of them were peaceful. And, worst of all, this exercise in what-aboutism equates urban violence with an attempted coup.

(I wonder what McCormack would have done to end the violence in Portland: Have federal cops open fire on the protestors? Kill a few?)

Let’s be clear: The Trump-inspired mob that attacked the Capitol wanted to stop Congress from certifying the electoral college victory of Joe Biden in the November election; the mob wanted to keep Trump in office. Had Speaker Pelosi not been rushed out of her suite, the mob might have killed her. This was a violent insurrection against our government and our democracy. Someone who compares it to urban violence and civil unrest is not thinking objectively and is probably (and tragically) absorbed in the right-wing take on Jan. 6. The right-wing media and a majority of Republican leadership want to dismiss Jan. 6 as just a bad day at the office — not a Trump-inspired insurrection and attempted coup.

Max Burns has a great take on this in The Daily Beast.

“You keep missing the main story right in front of your eyes: Baltimore’s killing and violence in a Democratic stronghold . . .”

McCormack is obviously another guy who criticizes what I write without reading it. He must not read my Sun column, which leans heavily toward addressing Baltimore’s many problems, the violent crime foremost.

The idea that Democratic politics has something to do with Baltimore’s problems and the issues facing other cities is the default position of Republicans who, as I’ve written, have little to do with urban America, a condition now more than a half-century old. The war on drugs, sending in the National Guard, ordering a posse of militarized federal police to Portland and possibly other cities — that pretty much sums up Republican urban policy of the last 50 years.

Andy Harris? Yes, he’s “bad, bad” as a member of Congress — a man who has little to show for six terms in office representing Maryland’s 1st District. He supports not only Trump but, weirdly, Hungary’s autocratic leader Orban. Harris has been publicly raising doubts about the safety of the COVID-19 vaccines at a time when he should be encouraging more of his constituents to get vaccinated — particularly unethical and irresponsible because he’s a doctor. I can’t think of a single Democrat in Congress who’s doing that.

Bitter? No. But very concerned for the state of our country and our democracy — and the future we are leaving our children.

2 thoughts on “Response to a tragically Trumped-up Terrence”